A big Well Done to Sara Connerton for her Gold and Silver Medals and James Veal for his Bronze at the Croyden Ne-waza Competition.

This is Saras story.. 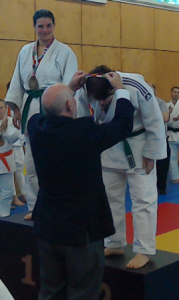 Since my first two competitions required me to wait some hours before fighting, I expected the same this time. How unpredictable judo can be though when I actually got to fight a lot sooner than expected. Luckily there was a green-belt adult within a kilo of my own weight, and it was her I was expected to fight for the ‘best out of three’ matches. I was surprised with how fast and aggressive she was: she threw me almost immediately but the ploy lacked the precise control needed and I landed on my side, gained control and tried to apply an arm lock, a strangle, mune katame and then I tried juji, taking advantage of her unclosed elbow. I couldn’t get my ankles to the floor or crossed behind hers in time though, and she countered by rolling towards me. Despite having my foot trapped, I managed to get on top of her again and found myself in a good position to try juji again. She rolled me again and pulled me down, but didn’t maintain proximity so I was able to edge away and reposition myself to take hold. I kept hold of her sleeve as she turned me and her failed strangle somehow enabled me to turn, pull my head from under her arm (giving myself a bruise beneath the eye as I did so) and escape. On the next resume, I took a different grip, almost wrapping each of my arms around each of hers. This allowed me to get closer and throw her tidily, almost straight into kesa, which turned into mune as she wriggled against me. I was really pleased to hear the sound of the ‘sore made’ bell and the ref’s “Matte!” signalling time was up.

In my second match against her, within seconds I was in a hold (stupidly I’d had a flat left foot that had made me vulnerable) which, within a few seconds, I managed to escape from by turning. When my rival put her hand on my waist, I thought of the Sarah Digweed moment and how the following training session in Basingstoke had addressed that error and how to take advantage of it … but I completely forgot what I had been taught. I rolled backwards instead of sideways and would have got myself into a strangle had I not anticipated it in the nick of time. My opponent next turned me by a clever move I hadn’t learnt, where her far leg extended sideways to allow her near leg to begin moving around me in a circle. I lost that fight and felt exhausted afterwards, thirsty and hungry.

By the third match, I had refuelled myself with a banana and more water than a camel could drink, and I won. Just before the match, I was advised to push her away and then pull her with her own reaction, and it was that guidance that gave me the advantage very quickly into the fight. I’m not sure what happened after that or how I won (my phone ran out of memory and didn’t record my victory!). It was a much tidier fight though.

Having won two out of three fights, glory was mine, but there was still one match to go – against an eighteen year old blue belt I’d chatted with during my warm-up. She went in fast and furious to put me in a hold I was quick to get out of. I sensed a few loopholes where the grip wasn’t tight enough though and persevered until I was out. When the match resumed, valiant efforts enabled me to keep my opponent suppressed on all fours and she was given a shido for not retaliating. I was pleased I didn’t get the shido for not doing anything else, but it seemed – at least at that point – that I was responding adequately. I won the match by being dominant and not having any penalties against me. Ironically though, when the medals were awarded for the Open we didn’t know we’d been participating in, I was given silver. My opponent and I looked at each other confused but the lady in charge explained that the blue-belt’s “ippon hold” had given her ten points whereas I’d only scored five for the win. Not fully understanding the information, I chose to accept it anyway out of respect for the lady’s expertise and my own lack of experience in the game. Before, the teenager had been quite cross to have lost and immediately she shook my hand and was happy. I was pleased for her to have kept face, and pleased with myself for beating her. This way we were both top winners.

As I left the dojo, I felt the weight of my handbag on my shoulder, anchored almost by my third gold medal in a row, and the silver one. I was shattered and that was only the start of my day….